Kubernetes is Greek for “helmsman” or “pilot”.  It was originally founded by Joe Beda, Brendan Burns and Craig McLuckie. Afterward, other Google engineers also joined the project. The original codename of Kubernetes within Google was Project Seven, a reference to a Star Trek character. The seven spokes on the wheel of the Kubernetes logo is a nod to that codename. Kubernetes is commonly referred to as K8s. It is an open-source system for automating deployment, scaling, and management of containerized applications. It was originally designed by Google and donated to the Cloud Native Computing Foundation. It provides a platform for automating deployment, scaling, and operations of application containers across clusters of hosts. It supports a range of container tools, including Docker.

Over the past few years, containers have grown in popularity. Containers provide operating-system-level virtualization.  It is a computer virtualization method in which the kernel of an operating system allows the existence of multiple isolated user-space instances, instead of just one. Such instances are called containers. A container is a software bucket comprising everything necessary to run the software independently. There can be multiple containers in a single machine and containers are completely isolated from one another as well as from the host machine. Containers are also called virtualization engines (VEs) or Jails (e.g. FreeBSD jail). Containers look like real computers from the point of view of programs running in them.  Items usually bundled into a container include Application, dependencies, libraries, binaries, and configuration files.

1.6 Composition of a Container

At the core of container technology are:

Control groups (cgroups) work by allowing the host to share and also limit the resources each process or container can consume. This is important for both, resource utilization and security. It prevents denial-of-service attacks on host’s hardware resources.

Namespaces offer another form of isolation for process interaction within operating systems. It limits the visibility a process has on other processes, networking, filesystems, and user ID components. Container processes are limited to see only what is in the same namespace. Processes from containers or the host processes are not directly accessible from within the container process. 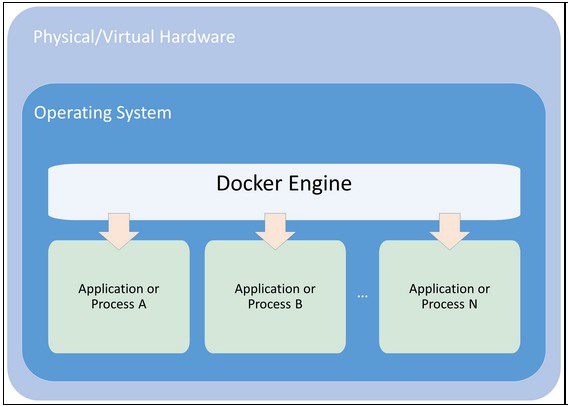 Containers run from an image, much like an image in the VM or Cloud world, it represents state at a particular point in time. Container images snapshot the filesystems. The snapshot tend to be much smaller than a VM. The container shares the host kernel and generally runs a much smaller set of processes. The filesystem is often layered or multi-leveled., e.g. Base layer can be Ubuntu with an application such as Apache or MySQL stacked on top of it. 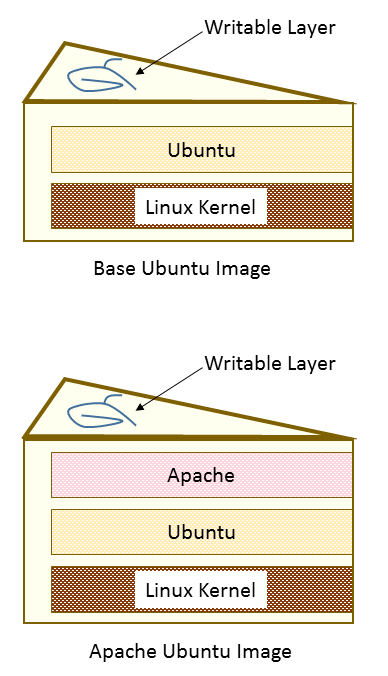 The microservice architectural style is an approach to developing a single application as a suite of small services. Each service runs in its own process and communicates with lightweight mechanisms, often an HTTP resource API. These services are built around business capabilities and independently deployable by fully automated deployment machinery.

Containers are excellent for microservices, as it isolates the services. Containerization of single services makes it easier to manage and update these services. Docker has led to the emergence of frameworks for managing complex scenarios, such as, how to manage single services in a cluster, how to manage multiple instances in a service across hosts , how to coordinate between multiple services on a deployment and management level. Kubernetes allows easy deployment and management of multiple Docker containers of the same type through an intelligent tagging system. With Kubernetes, you describe the characteristics of the image, e.g. number of instances, CPU, RAM, you would like to deploy.

Microservices require a reliable way to find and communicate with each other. Microservices in containers and clusters can make things more complex as we now have multiple networking namespaces to bear in mind. Communication and discovery requires traversing of container IP space and host networking. Kubernetes benefits from getting its ancestry from the clustering tools used by Google for the past decade. Many of the lessons learned from running and networking two billion containers per week have been distilled into Kubernetes.

Kubernetes provides a platform for automating deployment, scaling, and operations of application containers across clusters of hosts. Kubernetes supports a range of container tools, including Docker. Containers are useful for packaging, shipping, and deployment of any software applications that are presented as lightweight, portable, and selfsufficient containers, that will run virtually anywhere. Microservices can benefit from containers and clustering. Kubernetes offers container orchestration.