Security is important in all systems and more complicated in a distributed system. We can no longer put our application behind a firewall and assume that nothing will breakthrough. Testing the security of microservice is required and may vary slightly depending on how you implement security. Individual services may just be doing token validation, which means we have to test at the individual service level. Using another service or a library to validate tokens, requires our services to be tested in isolation with those interactions being tested and validated in a production-like environment.

Testing the security of microservice is required and may vary slightly depending on how you implement security. Individual services may just be doing token validation, which means we have to test at the individual service level. Using another service or a library to validate tokens, requires our services to be tested in isolation with those interactions being tested and validated in a production-like environment. 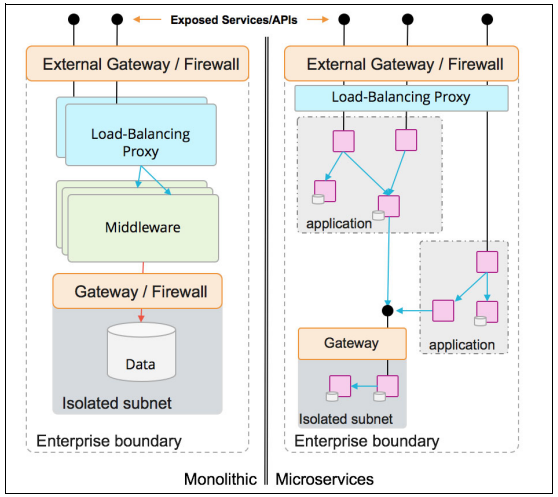 Collections of microservices are grouped as applications, and surface external APIs as endpoints through a gateway. One obvious difference above, from monolithic to microservice, is the number of moving parts. The other is how many more requests there are. In microservice enterprise architecture, you need to be aware of the possibility that the applications will make or respond to many millions of requests and responses.

Each Java EE server service must be trusted by all of the other services. Users receive security tokens after authentication (in WebSphere Application Server, this is an LTPA Token). User tokens must be valid on all servers. Trust stores are defined so that every server has the certificates of every other server. All services must use the same finite set of key(s). All J2EE servers for the same application(s) must be in the same security realm

Implementation of Role-based authentication in code, has our system with an action for creating and updating customers, that we want the ‘Sales’ role to have access to, and so we write code like this:

Later, we realized that, sometimes, people from the ‘Operations’ role should be able to create and update Customers. Now we update the Action method as:

Later again, we realize that some of the operations people should not be able to do this action, but it is not possible to assign a different role for those people who are in Operations. So, we are forced to allow all operations people to create and update Customers.

Anytime we change the roles, people are assigned, that should be allowed to create and update customers, we have to update all of our MVC Action methods Authorize attributes, build & deploy, test, and release our application.

Finally, we realize that ‘Operations’ is the wrong additional group for this role and we needed ‘Marketing’, now we’re updating code again across a bunch of services, and re-releasing.

Now, we can decorate our Action Method like this:

We can see that, CreateCustomer action method will always need permission ‘CanCreateCustomer’ and it will very likely never change. In our data store, we create a set of permissions (claims). In our data store, we create the user related to the permissions. From our administration interface, we can set permission (claim) for each user who can do an action or operation. We can assign ‘CanCreateCustomer’ permission (claim) to anyone who should be permitted. Users will only be able to do only what has been assigned from a permissions perspective. Claim information is usually passed between requests as a cookie to avoid database access, but again with a view to security and performance

When we split authentication off from a “monolith” application, we have two challenges to contend with:

JSON Web Tokens need to be transient. Creating long-lived JWTs isn’t practical, as they’re self-contained and there’s no way to revoke them.

Upon successful authentication a PersistentJwtTokenBasedRememberMeServices

JWT is meant to be used through the lifetime of the single page front-end and passed in the HTTP header (X-Set-Authorization-Bearer).

JSON Web Token (JWT) is an open standard (RFC 7519) that defines a compact and self-contained way for securely transmitting information between parties as a JSON object. This information can be verified and trusted because it is digitally signed. JWT contains the header and the payload. The first part is the token’s header which identifies the token’s type and the algorithm used to sign the token. The second part is the JWT token’s payload or its claims. There’s a distinction between these two. A payload can be an arbitrary set of data, it can be even plain text or another (nested JWT). Claims on the other hand are a standard set of fields.

Spring Security is a powerful and highly customizable authentication and access-control framework. It is the de-facto standard for securing Spring-based applications.