A few months ago JBoss Application Server v6.0, the open-source unsupported version, was released.  At the time in the announcement it was mentioned that the 6.0 version had been certified for the Java EE 6 ‘Web Profile’, which requires a subset of the Java EE technologies, but that the 6.0 version had not been certified against the ‘full’ Java EE 6 profile.  The reasoning given was that ‘resource constraints’ would add to the time taken to perform the full certification and JBoss felt it was important to release JBoss AS 6.0 to the community so that people who wanted to begin developing Java EE 6 applications with JBoss could do so.

It wasn’t very long before there were discussions in the community trying to clarify what this meant.  One thread in particular became very popular and has since received almost 14,000 views showing that this is clearly an important topic for JBoss users.  One of the main questions was the level of support for the technologies that JBoss has supported in the past but are not required of the Web Profile.  JBoss developers clarified that JBoss did support technologies like JMS, JAX-WS web services, and others but that they were just not “certified” because the certification had not been done for the full Java EE 6 Profile.  Of course this raised simply more questions and it was quickly clear that most of the community was unclear about the direction of JBoss, especially for the future JBoss Enterprise Application Platform (JBoss EAP) which is the supported version many clients use.

To help get the opinion of the community in a little more scientific way than just forum posts I created a survey about some of the questions and issues surrounding JBoss Java EE 6 certification.  The survey is still open so you can take it if you haven’t already but I wanted to summarize the results so they could help drive the progression of JBoss before JBoss AS 7.0, which is the open source version that will be used in JBoss EAP 6 (yeah, I know it’s confusing), is finalized.  Obviously commenting after the fact wouldn’t help anyone so this survey was a way for the community to speak up now.

First of all the survey seemed to be a hit and had 269 responses when I did the analysis described here.  The thread that introduced the survey has even been listed as a “featured discussion” in the JBoss forums so maybe that is something done by some of the JBoss developers to help improve community feedback (which I appreciate) and show they are interested in the opinions of the JBoss community.

Before getting into further analysis below I think I can summarize some of the biggest things that seem to be apparent from the results.  These points are for the full set of responses, I’ll break down some other groups later.

First of all, for full accountability I’ve made the summary results of the whole survey available here along with a spread sheet of all of the individual responses available here (for those statistics geeks out there).  Other files are also linked at the bottom of this post.

So let’s look at each of the questions and see what we might deduce. 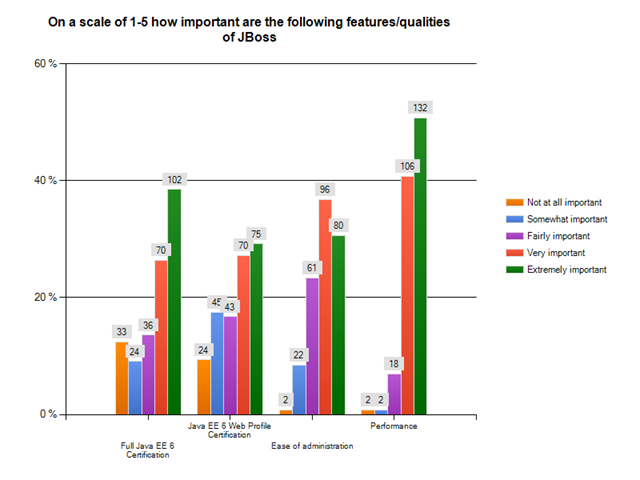 I think question #2 about if people were surprised that JBoss AS 6.0 doesn’t support the full Java EE 6 profile is pretty clear cut.  I think this makes it important for those guiding the JBoss development to clearly communicate the intentions for the upcoming versions of JBoss AS and JBoss EAP to address this gap in communication.

Arguably the question could be called misleading since you can make the argument that “doesn’t support” is different than “fully certified” but I think the result is clear that without the “fully certified” stamp of approval there will always be doubt that will be hard to justify to managers, etc. 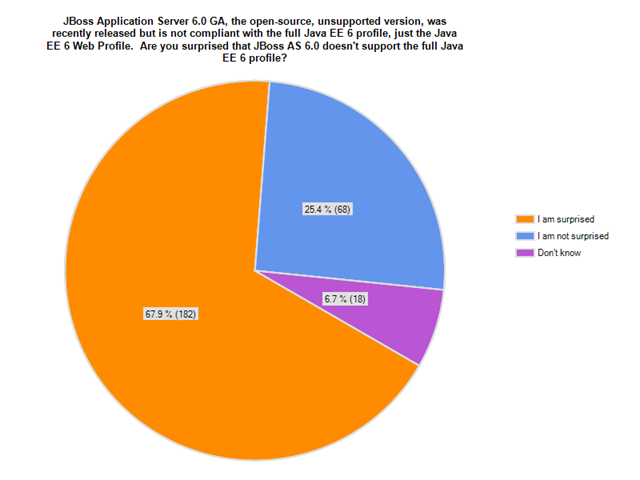 Question #3 on how long people would be willing to wait clearly indicates that the community would likely be willing to wait some time, as long as it didn’t drag on like JBoss AS 5.0 seemed to.  Hopefully the difference between being able to release a Web Profile certified version and a version certified for the full Java EE 6 profile would fall in this range.  For those not willing to wait, people can start using JBoss AS 6.0 right now for the newest cutting edge technologies, as suggested by JBoss developers. 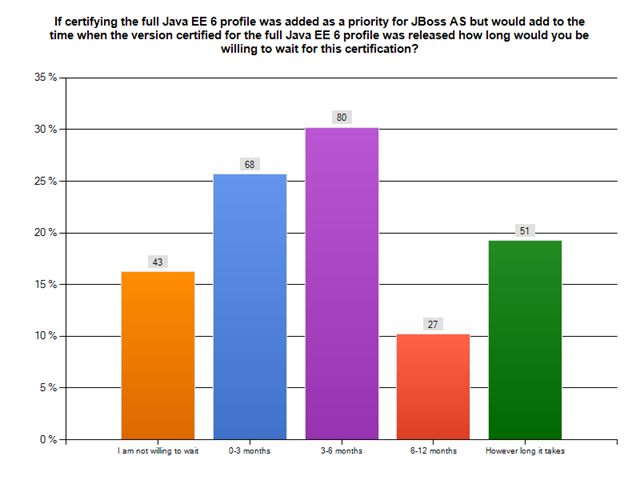 Question #4 is pretty clear that people want both the open source and supported platform to be certified for the full Java EE 6 profile.  Part of this could be people wanting to use the JBoss AS server without being an EAP client or for EAP clients to have more confidence that full Java EE 6 profile certification was not something introduced at the last minute.  Both are valid reasons though so hopefully this is what we might see (otherwise there would be a pretty big distinction between JBoss AS and JBoss EAP). 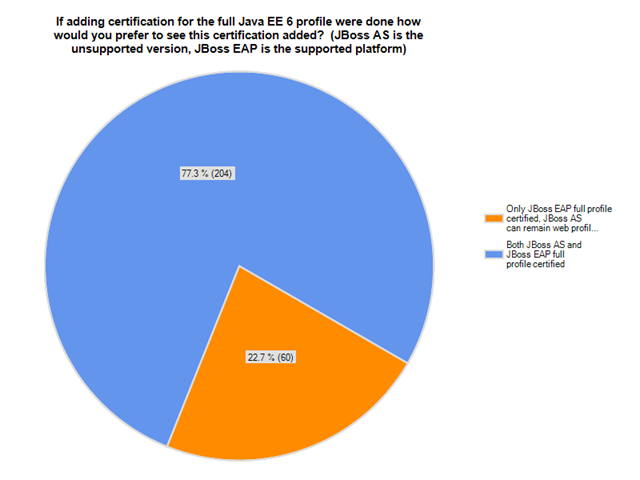 Question #5 on how likely people are to switch is much more interesting when you break down by groups which I’ll do later.  Overall though the notion that JBoss might not be certified for the full Java EE 6 profile has got some people thinking about if they will stick around.  Certainly with many more open source Java EE options out there compared to 5 years ago having 17% of your users say “I’m outta here” should cause some concern. 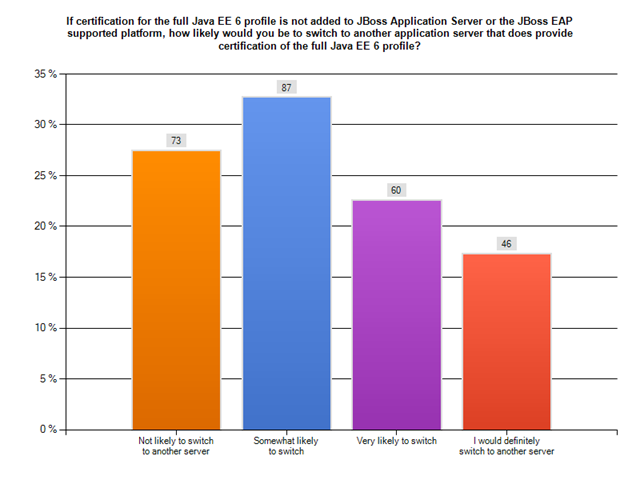 I asked question #6 to really get an idea of how many people taking the survey were JBoss EAP clients (and therefore paying JBoss money 😉 ) because a survey only advertised on the forums could attract a very different subset of people.  I think there is a good sample even if you assume all those that said “don’t know” are not EAP clients. This also lets us break down the results to focus on JBoss EAP clients only. 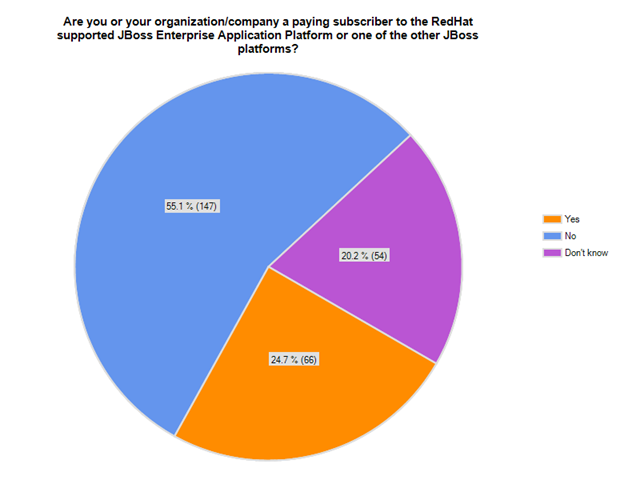 EAP Customers (66) – I think the group JBoss may be most interested in is how the people who indicated they are a JBoss EAP client responded.  I think the interesting points are:

EAP Customers “very likely” or “would definitely” switch servers (32) – You might look at the points above and think “EAP clients won’t really have a different opinion than the larger community”.  But if you look further at the subset of EAP clients who are more likely to switch servers there are some clear signs of why they would switch

Clearly this survey confirms that full Java EE 6 certification is an issue that the JBoss community cares about.  Hopefully the surprise at the approach for JBoss AS 6.0 and the value the community (especially EAP clients) place in full Java EE 6 certification will convince those involved in some of these decisions at JBoss to more clearly communicate the plans for yet-to-be-released versions of JBoss AS and JBoss EAP.  Personally I think they are and hopefully this survey has helped that process.

PS. If you are still reading JBoss is obviously important to you so you might be interested in some of the popular JBoss training courses my company offers… (sorry, had to plug the company on the company blog)

– JBoss 5.x (AS and EAP) Administration and Clustering on Linux or Windows

Spreadsheet with all responses collected

Summary with all responses included

Summary of respondents who are EAP clients

Summary of all respondents “very likely” or “would definitely” switch servers

I guess the demise of CMP, IIOP/Corba, and JAX-RPC is greatly exaggerated.

I think we have taken the correct first step in Java EE 6 creation of the web profile and indicating that these are “Proposed Optional” technologies. Hopefully in Java EE 7 we will expand the “profiles” available a little more and actually remove some things. I think a “legacy” profile would be great so vendors could still certify their support for things that are optional but these would not be required for the “full certification”.

Thanks for compiling the results of this survey. We will certainly take this feedback into account.