Networking services provide connectivity between cloud-based VMs, on-premises servers, and other cloud services. Google Cloud treats networking as a global feature that spans all its services. GCP networking is based on Google’s Andromeda architecture, which allows cloud administrators to create and use software-defined networking elements, such as firewalls, routing tables, and VMs.

1.2 GCP Networking Services and Components at a Glance 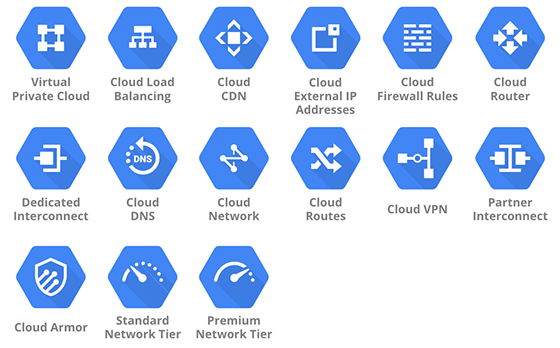 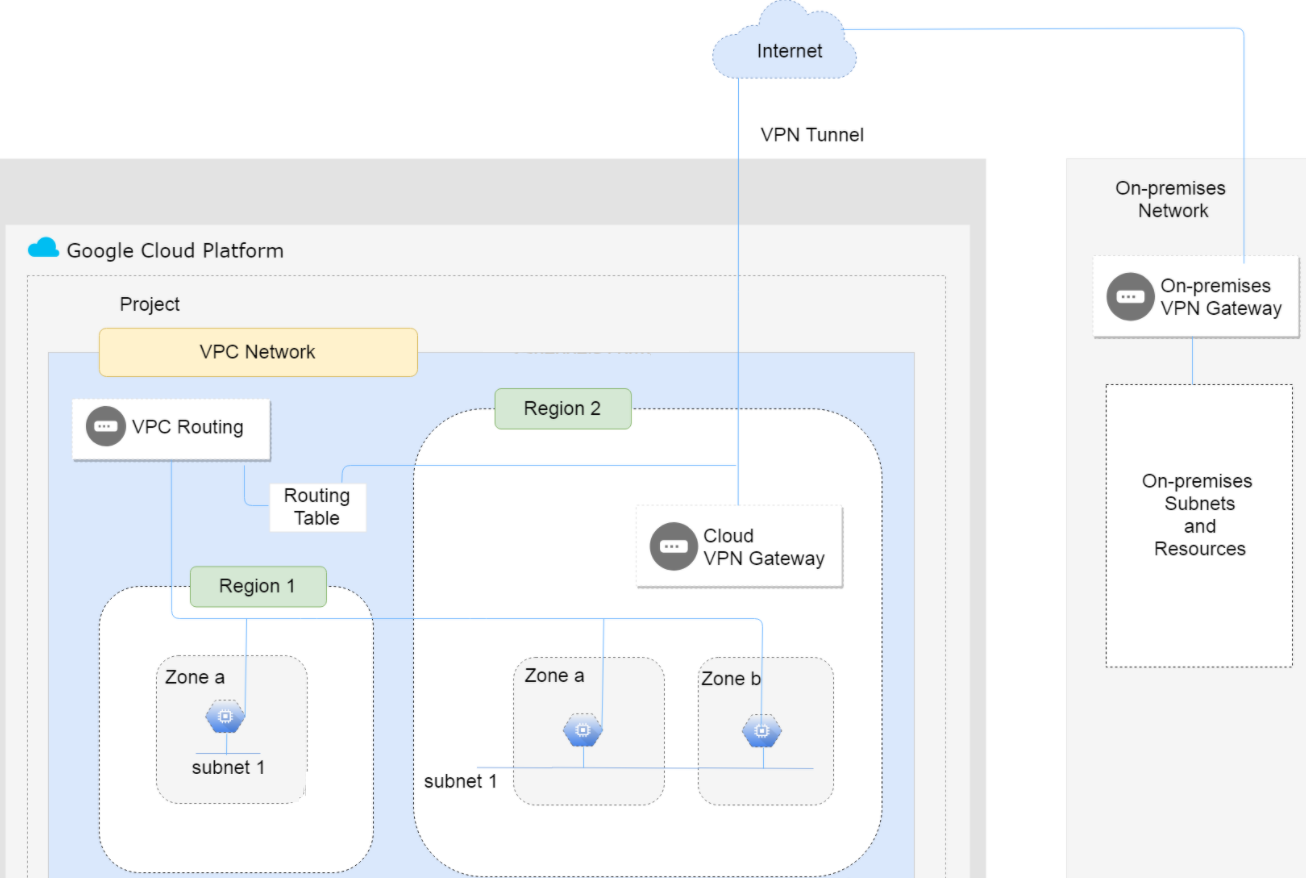 A Virtual Private Cloud (VPC) network is a virtualized layer on top of the physical network used by Google Cloud.

VPC networks and subnets are different types of objects in Google Cloud. VPC networks are global objects spanning all the available regions. Subnets are regional objects. A VPC network must have at least one subnet before you can use the network. Subnet creation mode defines the type of VPC network (more on that later in the module …). Subnets define IP range partitions within a VPC. Accordingly, a VPC network, as such, does not have any IP address ranges associated with them.  IP ranges are defined for the subnets. Each subnet is associated with a geographical region; you can create more than one subnet per region.

Google network documentation uses the CIDR network notation. Classless Inter-Domain Routing (CIDR) is a method for allocating IP addresses and for IP routing. CIDR notation gives a compact representation of an IP address along with its associated network mask using this form:

Firewall rules designate the 0.0.0.0/0 CIDR address to represent any source (e.g. the Internet).

It is good to know that there are several “non-routable” (not reachable from outside of the private networks) IP ranges:

The above IP addresses are routable only within private networks. 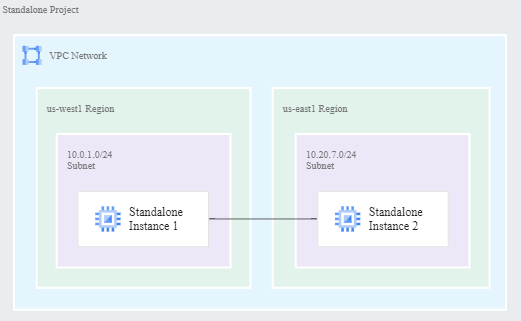 Any IAM user who has the compute.InstanceAdmin role for the project can created instances in this project. The project is designated as stand-alone since it is not attached to a host project, in which case, it would be treated as a service project with all the related administrative, billing, and organizational benefits.

A fast way to view the VPC (and legacy, if any) networks in your project is to use the gcloud compute networks list command. VPC networks will list their subnet modes; legacy networks will be marked with the LEGACY subnet creation mode.

Use the following gcloud command to view a specific network’s details:

Projects can contain multiple VPC networks unless an organizational policy prohibits it. While you can create and add more networks to your project, networks, however, cannot be shared between projects. New projects start with a default network (an auto-mode VPC network) that has one subnetwork (subnet) in each region. The default network (an auto-mode VPC network) comes with pre-populated firewall rules that you can delete or modify.

VPC networks, including their associated routes and firewall rules, are global resources. They are not associated with any particular region or zone. Subnets are regional resources; each subnet defines a range of its IP addresses. Traffic to and from your VM instances is controlled with network firewall rules. Firewall rules are implemented on the VMs themselves, so traffic can only be controlled and logged as it leaves or arrives at a VM. Resources within a VPC network can communicate with one another by using internal IPv4 addresses, subject to applicable network firewall rules. Instances with internal IP addresses can communicate with Google APIs and services. IAM roles can be applied when administering network resources. Using a Shared VPC [https://cloud.google.com/vpc/docs/shared-vpc], an organization can keep a VPC network in a common host project. IAM-authorized members from other projects in the same organization are allowed to create resources that use subnets of that Shared VPC network. VPC networks from different projects or organizations can be connected to each other using VPC Network Peering. VPC networks can be securely connected in hybrid environments by using Cloud VPN or Cloud Interconnect.

Types of VPC networks are determined by their subnet creation mode:

You can switch from an auto-mode VPC network to a custom-mode VPC; the reverse conversion is not supported (this is a one-way conversion path).

The most attractive feature of auto-mode VPC networks is the ease of setting them up. For production networks, Google recommends using custom-mode VPC networks. In the slide’s notes, you can find part of the table mapping regions to IP ranges and default gateway. Custom-mode VPC networks are more flexible than auto-mode ones and offer the following benefits:

Each firewall rule you create in Google Cloud consists of the following main configuration elements (called components in the Google Cloud documentation):

In addition to firewall rules that you create, Google Cloud has other rules that can affect incoming (ingress) or outgoing (egress) connections, for example, Google Cloud doesn’t allow certain IP protocols, such as egress traffic on TCP port 25 within a VPC network. For more information, see https://cloud.google.com/vpc/docs/firewalls#blockedtraffic

You create or modify VPC firewall rules by using either

Be aware of the configuration rule that a port cannot be specified by itself (e.g. 8080). Make sure you use it in combination F23 with the protocol (e.g. tcp:8080).

A route is a virtual networking component that allows you to implement more advanced networking functions for your instances, such as creating VPNs. Routes define paths for packets leaving instances (egress traffic), in other words, a route controls how packets leaving an instance should be directed. For example, a route might specify that packets destined for a particular network range should be handled by a gateway VM instance that you configure and operate.

For a complete overview of Google Cloud routes, visit https://cloud.google.com/vpc/docs/routes

If your VPC network is connected to an on-prem network through Cloud VPN or Cloud Interconnect, you need to make sure that your subnet IP address ranges do not conflict with those on-prem.

Every subnet has at least one subnet route for its primary IP range; additional subnet routes are created for a subnet if you add secondary IP ranges to it. Subnet routes define paths for traffic to reach VMs that use the subnets.

Currently, the following services are not supported by PGA: In the above diagram (description is borrowed from https://cloud.google.com/vpc/docs/private-google-access#pga-supported): 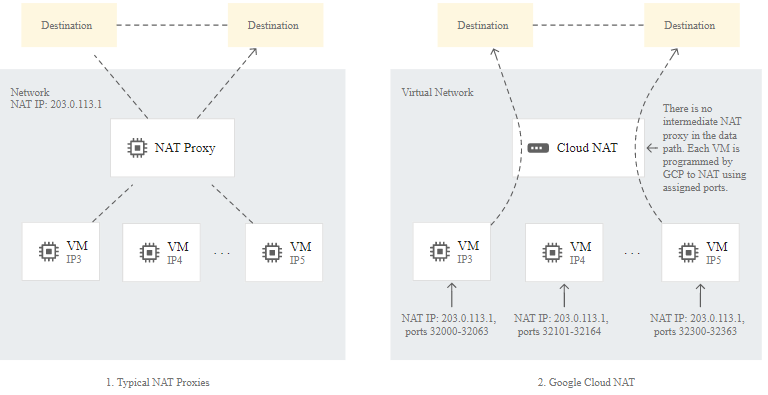 For the tutorial on how to automate network deployment, see https://cloud.google.com/solutions/automated-network-deployment-overview

All instances in Google Cloud are assigned an internal IP. An external IP, if needed, can be requested. Be aware that an external IP, once provisioned, by default, is tied to the life of the instance (may change after instance reboot). Static (permanent) IP addresses can be also requested; permanent IP addresses are re-assignable and can be re-attached to your instances as needed.

Google Cloud provides a set of DDos protection mechanisms, depending on the load balancer type

In addition to the automatic DDoS protection provided by the GFEs, you can configure Google Cloud Armor for external HTTP(S) load balancers.

* The Open Systems Interconnection (OSI) model describes seven layers used by computer systems to communicate over a network. Currently in use is a simpler TCP/IP OSI model. The OSI 7-layer model is still in wide use as it helps visualize how networks operate. 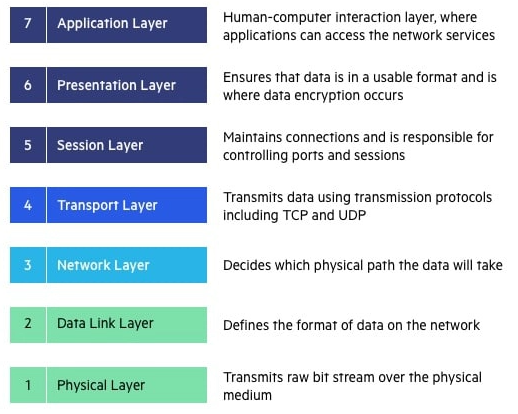 In this tutorial, we discussed the following topics: