Basic Automation with Vagrant and Ansible

Disclaimer- You will need a specific setup in order to follow all the steps in the tutorial. At Web Age, this setup is provided to students by setting up the VMS and sharing them with students. Sharing VMs in the blog is not possible as it is proprietary, but this tutorial will give you a good sense to understand the topic.

This tutorial is adapted from the Web-Age course WA2639-Devops with Jenkins, Terraform and Hashicorp Stack.

In this tutorial, you’ll learn how to: 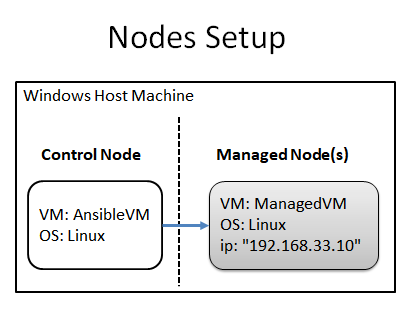 In the real world, computing resources can be of various types such as:

For this tutorial,  two systems need to be set up; one is for Ansible and the other for a node that you will manage using Ansible. The systems should be set up using Vagrant. The following Vagrant commands to start, stop and check on the systems

1. Download the files from here.  Open a terminal and navigate to the AnsibleVM directory.

2. Open the ‘Vagrantfile’ in an editor.

Gedit is a GUI-based editor.
Nano is a terminal/text-based editor. Essential nano commands include:
Ctrl-o {enter} – saves your changes
Ctrl-x – exits the editor

The Vagrantfile is in Ruby format. It starts off like this:

The format of the file follows that of a Ruby programming language script and includes a lot of commented lines. The comments are there as a guide showing the types of statements you might want to set in the file.

If we remove all the commented lines from our Vagrant script file we see that is it actually quite short:

The third line above sets the name that VirtualBox will display in its GUI.

The fifth line tells Vagrant which type of VM to download and install. In this case, it is pointing to a 64bit Ubuntu-Bionic Linux VM that’s been made available by ‘hashicorp’ (the makers of Vagrant). Many different types of VM ‘Boxes’ can be found at: https://app.vagrantup.com/boxes/search

4. Navigate to the ManagedVM directory:

5. Open the Vagrantfile script from the ManagedVM directory.

If we take away all of the commented lines it looks like this:

This is almost the same as what we saw in the AnsibleVM version of the file except for the second line which instructs Vagrant to make the VM available at the given ip address: 192.168.33.10

Now that we know a little bit about the Vagrant setup we can go ahead and start up the VMs.

7. While still in the ManagedVM directory, check the VM’s status by executing the following command:

This should return some text, including:

This indicates that the VM is not currently running.

8. Start the VM with this command:

9. When it is done the cursor should reappear at the terminal prompt. Check the status again:

This time you should see the following:

Now that the VM is up you can shell into it.

10. Execute the following command to open up a shell into the ManagedVM:

This will open a shell with the following prompt:

11. Execute the Linux ‘pwd’ command to see what directory you are in:

12. Use the linux ‘ls’ command to list the contents of the directory:

It should show the following ‘marker’ file that was created during setup. Its purpose is to remind you which VM you are in. (the marker file in the AnsibleVM is named ‘InAnsibleVM’):

13. Open up a new terminal and navigate to the AnsibleVM directory:

14. Use the following commands to check the status of the VM and then start it up:

15. Check the status again to make sure the VM is running:

16. Use the following command to create a shell into the AnsibleVM:

The following prompt should appear. You may notice that it looks the same as the prompt we opened into the ManagedVM.

17. Use the Linux ‘ls’ command to list the contents of the current directory:

You should also see the directory:

18. Navigate into the ansible-project directory:

You should see two files:

In the next section of this tutorial, we’ll take a look at these files and discuss how they are used by Ansible.

Ansible is an Infrastructure Automation application. By specifying one or more machines along with configuration instructions Ansible will connect to the machines deploy and configure the resources.

In this section, you will explore the Ansible setup. For this tutorial, Ansible has been installed in the Linux virtual machine: “AnsibleVM”. We will pick up where we left off in the last section: in the terminal, at the AnsibleVM prompt in the ~\ansible-project directory.

1. Open the ansible.cfg file in an editor:

You should see the following contents:

This tells ansible to use the hosts.ini file in the current directory. It is also possible to pass the location of the hosts’ file to ansible on the command line like this:

Without these methods of passing the hosts’ location ansible will look for the hosts’ file in the following location:

The ansible hosts file is commonly referred to as the “inventory” file because it holds a list (or inventory) of the machines being managed.

3. Open the hosts.ini file in an editor

You should see the following contents:

5. Run the following command to see a list of the servers in the inventory(hosts) file:

The list you see should include all of the hosts:

6. Try this command to restrict the list to only the servers in the ‘nodes’ group:

7. And finally, run this command to see just the one server in the ‘ManagedServer’ group:

The output should be:

You may have noticed that the ip address of the ManagedServer matches the one that Vagrant has assigned for the ManagedVM virtual machine: 192.168.33.10.

One of the things we can do with ansible is to run commands on the machines listed in our inventory. For now, we will focus on the ManagedVM server. (the other servers in inventory are not currently available or are not yet set up to be managed)

8. Run the following command to run the Linux ‘ls’ list command on ManagedVM:

Since the ‘-m module’ argument does not appear ansible defaults to the ‘command’ module with the options (-a argument) providing the command that we want to run.

The output shows the marker file ‘InManagedVM’ that identifies the server.

9. Try running these other ‘command’ module commands, one at a time, against ManagedVM:

In this section, you will load the ‘nginx’ web server onto ManagedVM using ansible.

First, we want to check if nginx is already installed or not. We can do this using ansible.

2. Use the following command to check if the ManagedVM is running:

If ManagedVM is running you will see:

If ManagedVM is not running you will see:

3. Check if nginx is running in ManagedVM using this command :

Since nginx is not currently installed you should get this after few seconds:

The first command updates the apt cache and the second installs nginx. After the second command, finishes scroll up and you should get this:

5. Now that nginx is installed you can use the following command to check if it is running :

6. Start nginx as a service using this command :

Next, we’ll create a custom html file and place it on the server. The following steps should be done from the AnsibleVM prompt that you are already using.

7. Use the nano editor to create a new file:

8. Enter the following text into the file:

9. Save the file and exit the nano editor:

10. Now we will copy the file over to ManagedVM so that it can be served by nginx :

If the copy is successful you should see something similar than this:

11. Now we will make a call to the nginx web server on ManagedVM using curl:

It should return the custom html content you created earlier and copied to the server:

1. Switch to the ManagedVM terminal.

In this tutorial, you learned how to: