A Build System for AngularJS applications

In part 1 of this article, we used Yeoman to setup a folder for a new AngularJS project. Now, let’s take a look at the project that we setup.

‘Grunt.js’, also known simply as ‘grunt’ is a task runner. Those of you coming from a Java background are probably familiar with Apache Ant. Grunt is sort of like Apache Ant, but written in and for JavaScript.

We installed the command line tool previously (‘sudo npm install -g grunt-cli’), so the ‘grunt’ command is available in our local binary folder (this is probably ‘/usr/local/bin’, but it may vary on your system).

When we run ‘grunt’, it reads a configuration file, ‘Gruntfile.js’ to find the tasks that are defined. If we have a look at the first part of, we can notice a few things…

First, notice that although it’s a configuration file, it’s actually a JavaScript source file that defines a function. This function is the exported object for a module in the ‘CommonJS’ module style. To actually do the initialization, ‘Grunt’ is going to call this function, passing in a reference to ‘Grunt’ itself.

This function does two basic things –

When we generated the template project with Yeoman’s Angular generator, it defined a few tasks for us:

Let’s check out a few of these tasks…

In the first part of this article, we created an application called ‘great-app’. Let’s go back to that, and return to the folder that we created.

What should have happened is that you see a bunch of output, and then a browser window magically opened with a sample application running in it. 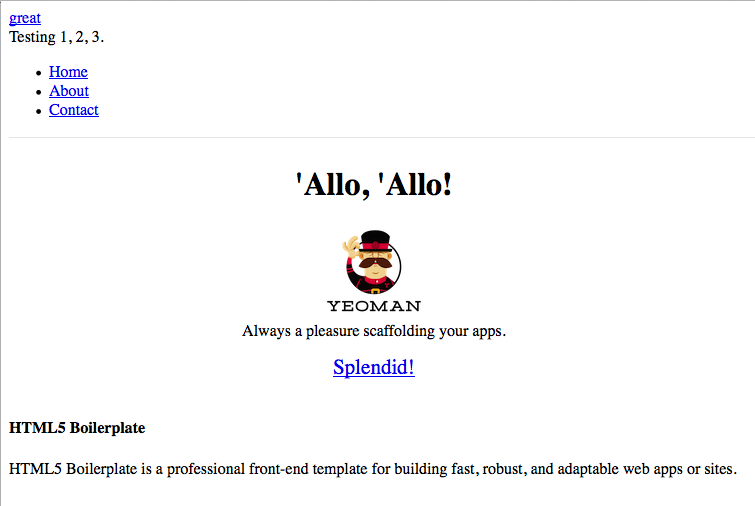 Right now it doesn’t look very impressive, but we’ll fix that shortly. First, though, notice that when we ran ‘grunt serve’, it didn’t actually return to the shell prompt. What’s going on?

‘Grunt’ is still sitting there, looking at the files that are mentioned under the ‘watch’ configuration. When we edit the files, ‘grunt’ will rebuild the system and then reload the browser window for us. Let’s give that a try.

Open an editor on ‘app/views/main.html’. Find the section that reads:

…and delete it, then save the file. Notice how the web browser updates itself automatically to reflect the updated view?

Now let’s spice up the appearance a little bit. The “template” app is intended to use the Bootstrap framework (http://getbootstrap.com), but when we answered ‘yo’s questions, we said no to Bootstrap. Let’s add that in after the fact.

To do this, we’ll use the ‘Bower’ package manager. Bower is usually used to take care of client-side packages like Bootstrap. We’ll add in the precompiled version of Bootstrap’s css files using Bower.

Leave the ‘grunt serve’ task running. Make sure that you don’t have any unsaved files in your editor. Open up another terminal window in the same folder, and then type:

You should see that there’s now a ‘bootstrap’ folder under bower_components. The ‘–save’ option tells Bower to update the ‘bower.json’ file, which tracks what packages we depend on.

Just above, we noted that the web browser updates itself automatically when we make changes to the view. Given the completeness of this setup, you might expect the build system to figure out that we added Boostrap, and then update the view automatically, but the view didn’t appear to change.

In reality, it did change, ever-so-slightly. If you open up the ‘app/index.html’ file in your editor, and look for the comment that starts with ‘‘, you should be able to find the following lines:

Notice that there’s a callout to ‘bower_components/bootstrap/dist/js/bootstrap.js’. What’s happened is that the ‘Gruntfile.js’ specifies a tool called ‘wiredep’ (short for ‘wire up the dependencies’). When we installed Bootstrap using Bower, Bower changed the file ‘bower.json’, which lists all the packages maintained by Bower. ‘Grunt watch’ picked up the change and ran the ‘wiredep’ task in response. ‘wiredep’ read the ‘bower.json’ file and then edited the file ‘index.html’ to include Boostrap’s entry point for JavaScript, ‘bootstrap.js’.

But what about Bootstrap’s cascadeable style sheet? Well, if you look again in ‘index.html’, you’ll find another ‘bower:css’ block in the head element, but it looks like the Bootstrap CSS file wasn’t picked up.

The reason is complex, and at the current time, a little contentious (Explanation here – NSFW language). Basically, Bootstrap is composed of a group of stylesheets that are compiled with the ‘less’ stylesheet compiler. The distribution includes the compiled stylesheet as well, but the new specification for Bower dictates that ‘bower.json’ should only call out source files, not compiled files. The correct way to handle things would be to setup a ‘less’ task in Grunt and have it compile Bootstrap when building. That would allow us to modify Bootstrap as it was intended. However, we would still be left with some questions about how and when to compile the stylesheets, and how to deal with updates to Bootstrap. That’s a bigger discussion than we want to have in this article, so we’ll cheat a little bit, since we’re not actually going to customize Bootstrap.

Now, open the file ‘app/index.html’, and find the comment line that starts with

Now, when you save the file, you should see that the web browser updates itself with a more pleasant-looking page, as a result of using the Bootstrap package. 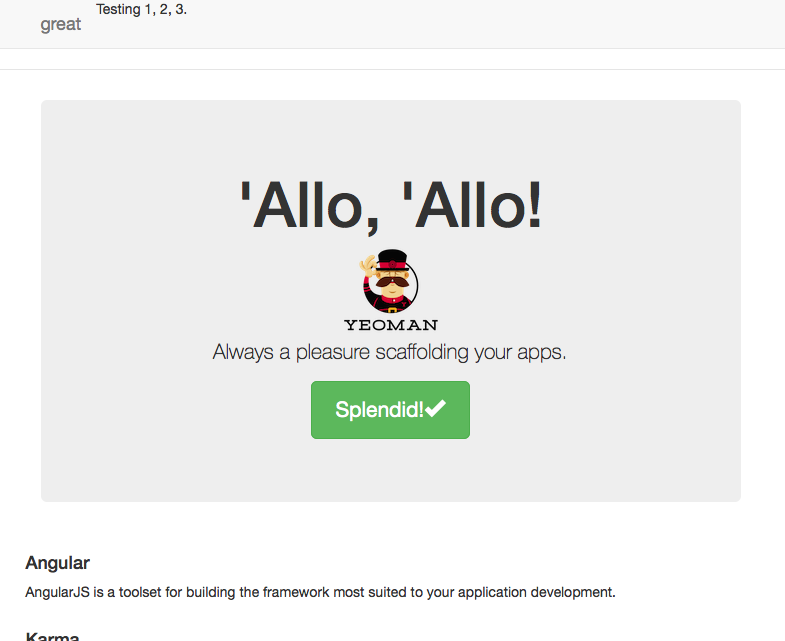 That’s it for now! You now have a build system setup with Grunt.js! You can add packages with Bower. You’ve seen how we can update the view page and have our browser update automatically using ‘grunt serve’.

In a future Knowledge Base article, we’ll create some AngularJS components and explore unit testing, and then we’ll produce a ‘production’ build of our system using Grunt.